Faridpur District Location,Importance And Basic Details. Faridpur Is A District Situated In Dhaka Division And On The Bank Of Kumar River. ...

Faridpur District Location,Importance And Basic Details.
Faridpur Is A District Situated In Dhaka Division And On The Bank Of Kumar River.
The Previous Name Of Faridpur Came From Fatehabad From The Era Of British.
Faridpur Held A Great Importance In Bangladesh.The Best Importance Was That It Was Used As A Central Landscape To Make A Good City.
Faridpur Was Divided After The Independence Of Bangladesh.
Now Let's Talk About The Educational Institution's In The Main Faridpur City Area. 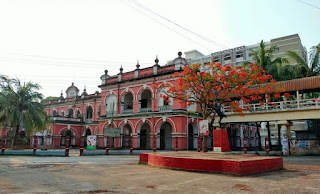 The Most Renowned Schools Are:

• Faridpur Zilla School• Faridpur Girls School• Faridpur High School• Saroda Sundori Girls High School• Faridpur Police Lines• Mohim Institution• Domrakandi High School• Halima Girls SchoolThat's It Let me Know If I Missed Any School.Now It's Time To Discuss The Best Colleges In Faridpur.The Best Colleges Are:• Govt. Rajendro College Faridpur• Govt. Yasin College Faridpur• Govt. Saroda Sundori Mohila College• Engineer Mosharraf Hossain College Faridpur• Govt Commercial College Faridpur• Govt. Sadarpur College FaridpurNow Let's Talk About Faridpuri Best Places To Spend Time In:• Dholar Mor• Faridpur Sheikh Rasel Shishu Park• Ombika Hall• Tambulkhana Beej Bhobon• Faridpur Mosla Govesona• Heliport Students areaThere Are More....Now Let's Talk About Who I Am?I am A Blogger And A Youtuber From Faridpur.I am Currently Studying In Govt Yasin College Faridpur.Now Let Me Recommend You Some Best Faridpur Groups:• Faridpur e Ja Hote Dekhesi• Faridpur e amk ja pap korsi• Faridpur crush• Faridpur Couple Concert• Faridpur Meme ConcertNow Lets See The Best Restaurants In Faridpur:• La Liga• Bel piatto• Dolce Vita• Rain ForestFor Any Sponsorships please Contact: contact.teftelis@gmail.com This Was It I Will Add More Information Later.
Faridpur is city situated in dhaka division and there are many people live in district Faridpur. Here has Docter, engineer,Farmers, Fisherman,labour and Administration office with everyone men live in Faridpur. So many people are very Standard life enjoy in district. Many suitable scenery are look like very beautiful is nearby faridpur district. As like as Sundarban forest division is very famous in country of Bangladesh. Sunderbor forest is the very countable forest in the world. There are many big land for the forest division. There have many famous animals live in sundarban forest. As you want Tiger, Lion, Elephant, Monkey, Deer, Shippanjbi, Crocodile, Gonder, Water elephant with very suitable bird live in Sundarban forest.  But There are live very Serious people as like dangerous man. who are fight our police for their won status of locality. But never they did not victory of fighting with our national force of police. Our police force are very intelligent force always they are allowed for security of our country Bangladesh. Bangladesh police force is very intelligent force. This force all are same which are some of police dividation every district of any Thana in our country of Bangladesh. For this course Faridpur district have many intelligent police force for the security of any problem in society. This faridpur district stand on the bank of kumar river. The river of kumar has gone to all over Bangladesh. The District of Faridpur are very famous in Bangladesh because here has big Darbar sharif whats name is Atroshi Bisso Zaker Monjil. The meny people of Bangladesh has come when here is situated Orash Mobarok. Dhaka, Barisal, Khulna, Sylhet, Rangpur. Mymensingh and Rajshahi`s people has come in this Atroshi Bisso Zaker Monjil. and In the greater Faridpur District has Gopalganj District. The Nation of Father in Bangladesh who is Banggo Bondhu Sheik Mujibur Rahman was born in Greater Faridpur. Here has Rajendro University College. Bango bondhu Sheik Mujibur Rahman was read in this Rajendro University College and his Father Sheik Lufar Rahman was service of job Tali Clerk in Ambikapur food godown at Faridpur. Now the very famous person who live in Faridpur are under some kind of pressure but that is not the matter.
faridpur is a great city in bangladesh and hopefully one day faridpur ewill be made one of the division of bangladesh.
recently there was a rumor that faridpur was being made a division but it won't be named after faridpur.
people of gopalganj are urging that their district name should be the name of a division.
but let me clear that when faridpur wasn't divided the gopalganj was just a part of faridpur.
as the prime minister of bangladesh belong from gopalganj for that reason gopalganj is demanding this propaganda.
but gopalganj is no where near by the faridpur districts dignity.
faridpur has a lot of great places as i mentioned above but now i am gonna tell you even more.
as you guys who know about faridpur also know that faridpur was renamed after the great saint farid shah so, many of us want to know the location farid shah mazar so now i am gonna tell about it.
farid shah mazar is in the place near DC Office faridpur.
it's not that big but when you go there you will see that there is a title saying the mazar of farid shah so you can simply visit it anytime you want.
so now let's move onto another place called the atroshi, atroshi is a place in faridpur where all of the muslims in bangladesh comes from all of the country.
the atroshi is a place where most of the muslims come to make a mannath.
in a certain time of year you can see in the roads that buses are full and people are going to atroshi like a picnic. many people also visit dholar mor. dholar more is a frequent visited place in faridpur.
you can see most of the couples in faridpur goes to dholar more because the atmosphere in dholar mor is very calm and you can feel like going on a mini beach without a big budget.
for that reason dholar more is always crowded all around the year.
it's a great atmosphere for all of the people in faridpur.
guys this was the first post on faridpur district, bangladesh.
if you want to know more about faridpur then please subscribe this blog because we are going to write more about faridpur and hopefully you will love the blog posts.
so this was it and thank you everyone for reading so far.
yours host and dost,
Mr Source